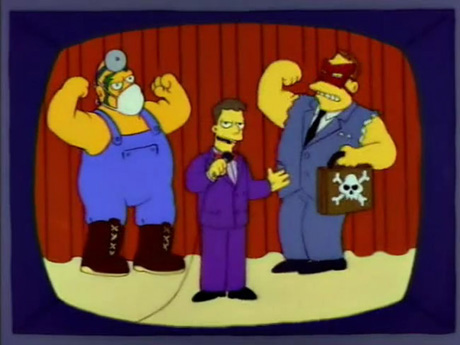 What Happens: “Last Exit To Springfield,” about Homer becoming President of the power plant’s labor union and leading its workers in a strike to get back a dental plan (because Lisa needs braces) (dental plan) (Lisa needs braces), is the closest thing you can get to an objective Best Simpsons Episode. It is a truly epic 22 minutes, touching on everything from Buster Brown to The Beatles (“‘elp us”) to Batman to the infinite monkey theorem to How The Grinch Stole Christmas! and f**king ‘Classical Gas’. In its great sports moment (because it really includes EVERYTHING), ‘The Simpsons’ gets to the heart of the pro wrestling industry by dressing up two guys as stupid characters, then killing one of the two.

Key line: “Now stay tuned for professional wrestling live from Springfield Grappelarium. Tonight a Texas death match: Dr. Hillbilly versus the Iron Yuppie. One man will actually be unmasked and killed in the ring!”

Homer’s response to watching the match announcement is pitch-perfect wrestling fandom: “I hope they kill that Iron Yuppie. Thinks he’s so big.”

The creators of ‘The Simpsons’ really got what makes pro wrestling a thing, something they prove again in ‘Futurama’ with The Foreigner (“I’m not from around here! I have my own customs!”). This is one of two great golden age Simpsons wrestling moments, followed a few years later by former WWF Champion Bret Hart moving into Mr. Burns’ mansion and complaining about the old man stink. As a lifelong wrestling fan, my only two regrets from these moments are that we didn’t get to see the Shrieking Sheik (to confirm whether or not he’s the one we’ve got in real life), and that we never found out who survived that Grappelarium card.

My money is on Dr. Hillbilly. Wait, no, Hillbilly wins, but then Iron Yuppie cashes in his briefcase.