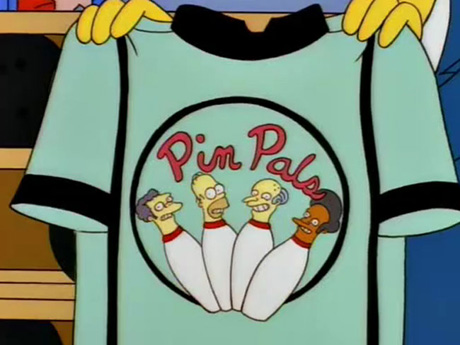 What Happens: Moe’s bar is empty one night, so Homer and Moe decide to head to the bowling alley for something to do. When they get there they realize it’s league night. Homer ends up forming a team with Moe, Apu and Otto. The problem is registration is $500 and despite all of them having jobs, that is apparently too much money. Homer gets the money from Mr. Burns, who was drugged up at the time. When the team, know as “The Pin Pals,” was in the finals of the bowling tournament Burns showed up to participate.

Key Line: “Come on Homer! Come on Homer! Pretend this is baseball and hit us a homer!” Homer hits a strike and tells his team: “By the way rhyming Homer with Homer? *mwah*”

There are a few Simpsons episodes with bowling involved (“are poo and ass taken?”), but this is my favorite one. The scene where Burns says he wants to join the team only to fail to move the ball more than a few inches was awesome. It was even better when Smithers ran down to the pins to knock them down like the lackey that he is.

I think my favorite name of the bowling teams was The Stereotypes because any time you can get Cletus the Slack Jawed Yokel, Luigi, Groundskeeper Willie and Sea Captain on screen at the same time you know it’s a winner. Then Apu was shown with his head in his hands saying that they begged him to join the team. Brilliant.

The guys wanted Homer to kick Burns off the team, but Homer had a tough time doing it because Burns is his boss. They played it out with Burns on the team (he bought them Pin Pals uniforms after all) and miraculously won the tournament against the Holy Rollers thanks to Otto causing a disturbance using the claw machine. Burns ended up taking the trophy for himself, which pissed off the team. Homer went to steal it at Burns’ house, but that didn’t work because the dogs were after him and that ended the episode with the team abandoning Homer.

The bowling part is the main plot of the episode, but Bart’s misbehavior leading to the school wearing uniforms is pretty good too. That was the beauty of ‘The Simpsons’ in their prime. It wasn’t just about one story. They had depth.