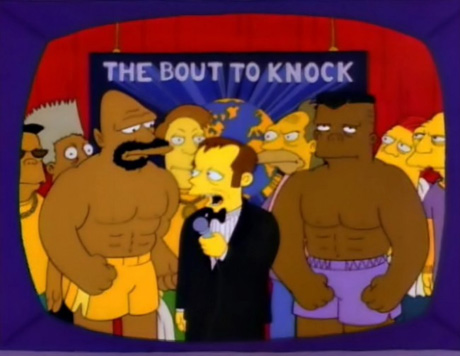 What Happens: A Sunday School lesson about the Ten Commandments scares Lisa, who believes that her cable-stealing father has broken the Eighth Commandment and will go to Hell for it. Homer throws a watch party for the “THE BOUT TO KNOCK THE OTHER GUY OUT!” boxing pay-per-view, but Lisa’s conscience (and eventual out-on-the-lawn protest) guilt him into dragging his family out into the yard, not watching the fight, and assumedly saving their souls. After the fight, Homer cuts his illegal cable line and accidentally cuts power to the entire neighborhood.

MacLean’s magazine’s Jaime J. Weinman, on “Homer vs. Lisa and the Eighth Commandment”:

“[It was] the first truly great episode — the one that established The Simpsons as the funniest and most multi-layered sitcom around. The story of Homer stealing cable was an excuse for dozens of parodies of early 90s cable TV, but it was also a story about Homer and his daughter and an examination of how we rationalize little acts of theft in our daily lives.”

Hell, I’m in it for the pre-fight banter between Watson and Drederick Tatum, who both dedicate their performance to the memory of Watson’s manager Vinnie and get into a fight about it. By the way, if you need a really great Simpsons trivia question, Watson lost to Tatum by knockout in the tenth round. Would’ve been a tragedy for The Bout To Knock The Other Guy Out to end in a decision.