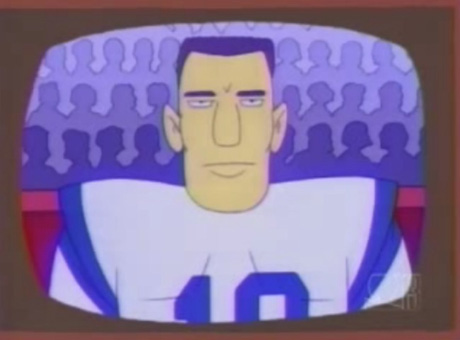 Key line: “Look at them sideburns! He looks like a girl! Now, Johnny Unitas, there’s a haircut you can set your watch to!”

My grandfather threw a party for Super Bowl III, and the reason he did was that Namath guaranteed a win. If Broadway Joe said it, it was going to happen. Namath was drunk when he made the boast, and he only did it because was arguing with a Colts fan, and if there’s anything pro athletes need to do it’s win bar arguments with fans. What I’m getting at here is that Joe Namath is the spiritual father of the modern New York Jets, and indirectly the reason you’ve had to suffer an endless stream of Rex Ryan soundbites for the past three-plus years.

If this makes you angry, I suggest you spend more time looking at Namath’s glowing tresses. Life’s better that way. Consider their respective endorsement deals. Namath modeled pantyhose on account of how shapely and good looking he is, while Unitas is stuck shilling Krustariffic mustache removal systems.