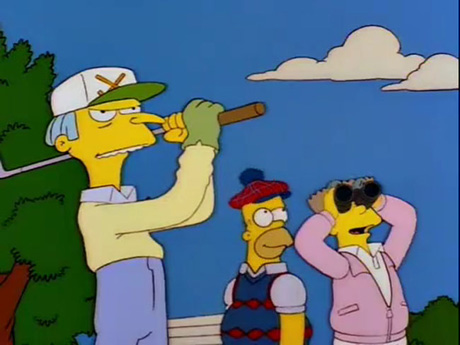 What Happens: After Marge stumbles across a real Chanel outfit at an outlet mall, she is mistaken for a member of the town’s upper crust and the Simpson family is invited to the Springfield Country Club. Homer displays a natural ability for golf, which he shows off at work by chipping balls into the men’s room toilets, leading to Mr. Burns challenging him to a match at the club. The evil tycoon jumps out to an early lead, confounding Homer, until the secret to his success is revealed.

Poor Smithers. Poor, poor Smithers. So devoted to his boss that he led him to believe that he was a world class golfer for years — YEARS — and did it in a way that made it impossible to receive any recognition. And why? For what? Based on everything we, and he, knew about Mr. Burns, it’s no stretch to believe that the old man would have been devious enough to sign off on a plan that involved his loyal manservant literally sprinting down the fairway of every hole to retrieve errant tee shots and surreptitiously place them on the green before his playing partner noticed. That’s classic Mr. Burns. But Smithers didn’t want recognition, not this time at least. He just wanted his boss to win, and beyond that, to feel like a winner. If Mr. Burns knew Smithers was cheating on his behalf he would have still had the spoils of victory, which is all he cares about, but not be filled with the warm, fuzzy feeling that goes along with with it, which is all Smithers cares about.

And what does Smithers get for his trouble? A golf ball in the noggin. The whole thing is a goddamn tragedy.