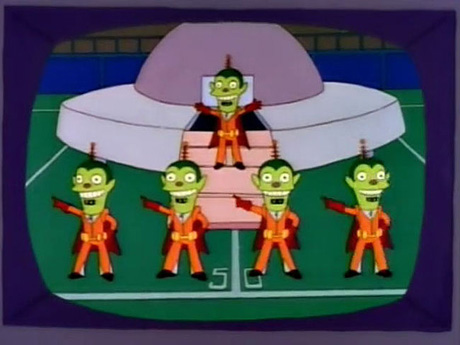 What Happens: Homer discovers Lisa’s gift for picking the winners of NFL games and bonds with her every Sunday during football season Daddy-Daughter Day. When Lisa asks her father to go hiking with her on Super Bowl Sunday, she finds out that Daddy-Daughter Days don’t include the offseason and realizes she’s being used. Heartbroken, she gives away the Malibu Stacy accessories (including the collagen injection clinic) she earned with dirty gambling money. Homer tries to make amends, but he still wants a Super Bowl prediction, and Lisa provides one: if Washington wins, she still loves him. If Buffalo wins, she doesn’t.

Best episode moral ever: If the Buffalo Bills win the Super Bowl, daughters will no longer love their fathers.

‘The Simpsons’ manages to build a touching episode about putting your children ahead of your vices around gambling on football games, but the best moment is the “never-tedious” Super Bowl Halftime Show. I don’t know if the writers got together and workshopped the most unbearable idea for a halftime show ever, but they nailed it: aliens land in on the 50-yard line and announce that they’ve come bearing a message of peace, then just sing ‘Rock Around The Clock’ with barely-changed outer space lyrics. F**king brutal. The only thing keeping it from objectively being the worst idea for a Super Bowl Halftime Show is that the Black Eyed Peas didn’t exist in 1992.