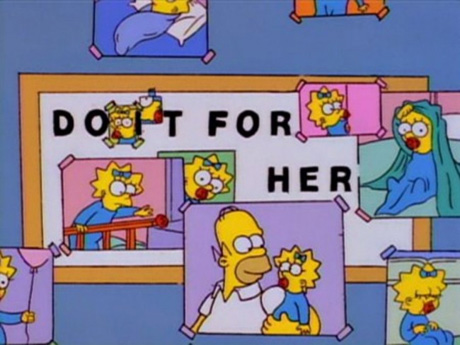 What Happens: It’s less about sports than about giving up sports, but no rundown of classic moments from the golden era of ‘The Simpsons’ is complete without it. Homer hated his job at the power plant, and when that final paycheck necessary to clear his debts arrived, Homer quit and took his dream job: working at Barney’s Bowlarama. He “snuggled” with Marge to celebrate. That got her pregnant. When Homer finds out he’s got another kid on the way, he’s forced to say goodbye to the one job that would ever make him happy and go crawling back to the power plant, working under a gigantic plaque reading DON’T FORGET, YOU’RE HERE FOREVER. To cope, Homer changes the plaque’s message with pictures of his new baby daughter.

Key line: “I was in heaven. If horse racing is the sport of kings, then surely bowling is a … very good sport as well.”

The emotional impact of this moment is lessened a bit by the show’s inconsistent depiction of Homer and Maggie’s relationship (he forgets she exists most of the time, and at one point locks her in a newspaper machine), but man, the episode and moment in itself is one of the most touching moments I’ve ever seen in a sitcom. It’s absolutely up there with “Mother Simpson” as one of the most emotional Simpsons moments, and stands up next to any of the tearjerkers from ‘Futurama’.

It’s important to never understate exactly how good ‘The Simpsons’ was in its prime, especially when we’re on a forum somewhere complaining about how pandering the jokes are now, or how Homer’s only jokes are that he hurts himself and hates his family, or the repetitive divorce-teases and celebrity guest stars. It was a show that could pound you into emotional submission with irreverence, make you laugh at jokes you barely understood, and make you smarter for having experienced it. This time with ‘The Simpsons’ is the best we’ll spend with a television, no matter where life, time or a refusal to die take us.