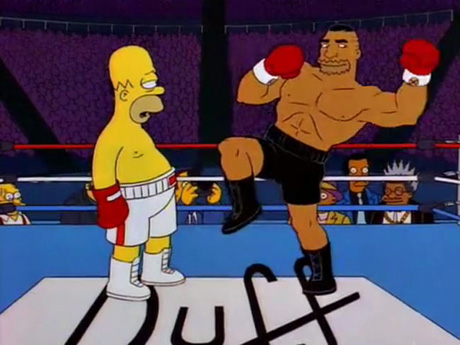 What Happens: Moe discovers Homer has a rare condition making him impervious to blows to the head, which he and Homer parlay into a successful run of boxing victories over bums, hobos, tramps, and vagabonds. Lucius Sweet, a Simpsons-universe Don King stand-in, offers Homer and Moe a title fight against Mike Tyson stand-in Drederick Tatum, fresh out of prison. Moe talks Homer into taking the immense payday, but when it becomes clear that Tatum is on his way to killing Homer in the ring, Moe steals the Fan Man’s paraglider and airlifts Homer to safety.

Key line: “I got nothing against him, but I’m definitely gonna make orphans of his children.” “Uh, you know, they do have a mother, champ.” “Yes, but would I imagine that she would die of grief.”

The episode really benefits from their getting the stand-ins right, where they’re closer to matching the tone of their real-world counterparts than they are caricatures. Hank Azaria’s Tatum is a charming, tender man who pushed his mother down the stairs and almost kills Homer. That said, their take on the Fan Man, may he rest in peace, isn’t so accurate. I mean, I assume it isn’t, Fan Man’s only distinguishing characteristic is that he fell on a boxing ring and then got beaten up by about 30 people.

The episode is another strong example in how the Simpsons forecasted a lot of ideas and trends that would surface in later pop culture. Homer’s boxing strategy centered around the idea that the best way to block a punch was with his face. That’s a strategy employed by numerous modern MMA fighters, to great effect. Consider the first fight between Stephen Bonnar and Forrest Griffin, the culmination of the first season of The Ultimate Fighter. Both men used The Simpson Strategy, putting on a fight that gave Dana White the three-quarterest three-quarter wood he’d ever had. The rest is history, MMA has exploded on the sports world and is almost certainly well on its way to becoming bigger than the NFL. Is it possible to credit Homer Simpson’s unusually thick skull for that? I don’t see why not.