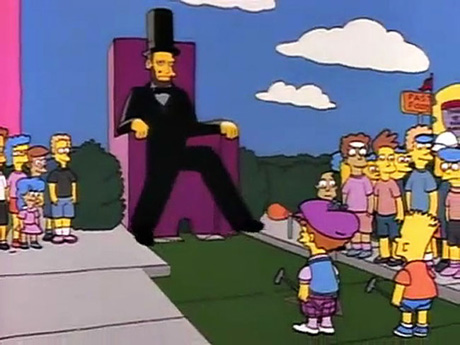 What Happens: Homer finds out that neighbor Ned Flanders has a functional relationship with his wife and children and becomes ENRAGED, deciding that the only way to one-up a man who has done nothing wrong is to force Bart into a miniature golf competition against Ned’s son. A bet is made wherein the father of the losing child must mow the winning child’s father’s lawn in his wife’s Sunday dress. It all goes down at Sir Putt-A-Lot’s Merrie Olde Fun Centre, and eventually Todd Flanders and Bart decide the stress isn’t worth it, declare the game a draw and leave both fathers doing yardwork in dresses. Homer can’t even get joy from this, because being in a dress reminds Flanders of his fraternity days. D’oh.

Key line: “Come on, Bart! Remember what Vince Lombardi said: If you lose, you’re out of the family!”

This episode is key to the early dynamics of Homer Simpson. In earlier episodes, you understand that Homer loves his family and wants the best for them, but is also at the whim of his sudden emotional mood swings and can end up abusing them or putting them in harms way to make a point. It’s the very real, natural thought process of a loving, yet stupid and confrontational man. In current episodes, Homer is only capable of pulling a ‘Scrubs’ thing where he’s an aggressive asshole for 21 1/2 minutes, then goes “aw I’m sorry I actually love you and feel deep emotions” in the final thirty seconds for pathos he didn’t really earn.

The message of this episode is a great one that doesn’t get expressed enough on television without a Disney Channel denouement: kids shouldn’t worry so much about stuff like miniature golf tournaments, because they’re kids, and adults have a way of making everything around them frustrating and stupid.

Also, early Ned is choice. “You are my brother. I love you. And yet, I feel a great deal of sadness in my bosom.”