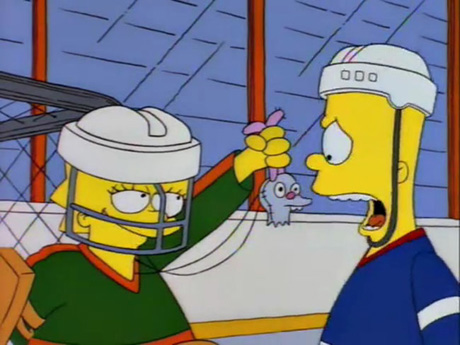 What Happens: Homer gives Bart all of his love and attention for being the star player of his hockey team, but when Lisa becomes the star goalie of HER team, battle lines are drawn. “Okay Marge, its your child against my child. The winner will be showered with praise. The loser will be taunted and booed until my throat is sore!” After a bitter rivalry and too many great moments to name (including Marge stealing and coveting Milhouse’s teeth, Homer snapping a towel at Uter and making him run despite being “full of chocolate” and references to both Rollerball and The Pope of Greenwich Village), Bart and Lisa throw down their gear and hug, letting the game end in a tie. The arena riots.

I almost went with the simpler, timeless, “HEADS UP LITTLE GIRL”.

“Lisa On Ice” is one of the best pure Simpsons sports episodes because it puts the characters into the sport in a realistic way (Bart and Lisa join local Pee-Wee League teams, they don’t suddenly become starters for the Rangers and run into Mark Messier or whatever), and it discusses very real sports themes, like the importance of respect and the ridiculous attitudes of local sports parents. Homer’s attitude here is funny because it is exactly right. I can’t tell you how many gym classes I spent cowering in the back of the dodgeball gathering because the teacher wanted to show us how good of a guy certain people were at sports.

Also from this episode: