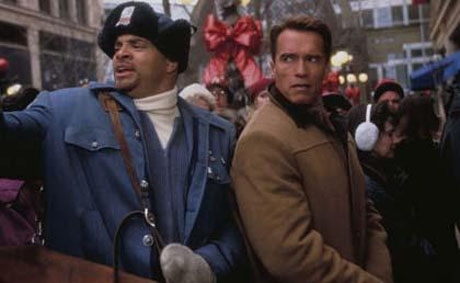 “Given the leaden nature of the material, Schwarzenegger probably couldn’t even bench-press the script. Who talked the Big Guy into this? The performances are uniformly awful, but screenwriter Randy Kornfield’s dialogue give them little to work with.”
Jack Matthews, LA Times
What we say:

Uptight audiences looking for one last action-hero outing from Arnie failed to see that this Christmas pile-up was his best comedy work by miles.

As Arnie’s neighbour, Phil Hartman brings some of The Simpsons’ smug suburban class to the film, while the big man’s running battle with fellow dad-on-a-mission Sinbad parodies his own action career – and the big fight set-piece featuring a knock-off factory full of counterfeiting Santas is, well, amazing.