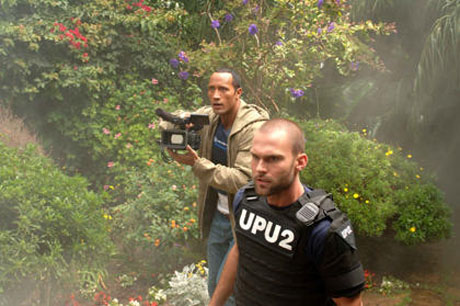 “Frustrating and finally rather pointless. Is there anything going on behind these randomly firing synapses?”
Xan Brooks, The Guardian
What we say:

The same critics who applauded Kelly’s freaky teen time-travel debut Donnie Darko for its snippy sense of humour and impenetrable plot somehow missed the point of its super-ambitious follow-up.

Southland Tales throws away in seconds ideas other movies would snaffle up as high concepts, whipping up a tornado of fascism, pornography, subjectivity and The Rock’s eyebrow.

It’s flawed, certainly, but almost better for it – think of it as an American Brazil. And rewatch immediately.