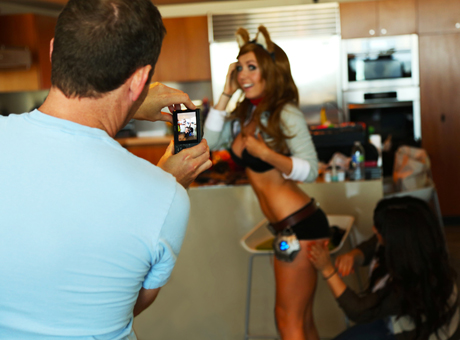 In 2010 a little-known cosplayer named Jessica Nigri showed up at Comic-Con in a Pikachu costume. In a matter of hours, the photos exploded across the blogosphere. Jessica became an overnight sensation.

But since that time, Jessica has established herself as one of, if not the best cosplayer in the world. Her recent conjurings including Juliet Starling (Lillipop Chainsaw) and Mad Moxxi (Borderlands 2) have earned her worldwide recognition.

Jessica is also a long-time Chivette. Before arriving at theCHIVE offices, I’d heard dozens of stories about how kind Jessica is to the Chivers. She goes out of her way at all the ‘Cons to say hello or photobomb the crap out of them.

Jessica is a true gamer girl too, she’s a walking gamer’s Encylopedia. It’s scary. She’s also got a wicked sense of humor, a generous heart, and we’re sorely missing her already here at theCHIVE offices already. Enjoy the shoot…