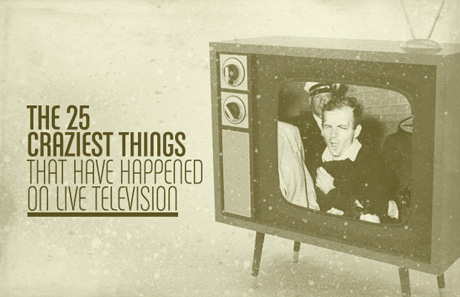 Live TV can either be a network’s best friend or its worst nightmare, but no matter which way it goes, the unpredictability makes on-the-spot entertainment great. Over the years, historical moments have been caught in real time, captivated the masses, shattered hearts worldwide, and, in some cases, have forever changed the course of history. Whether dealing with wars, natural disasters, or entertainment, it’s a breeding ground for the sensational.

Tomorrow marks 49 years to the day since President John F. Kennedy’s assassin, Lee Harvey Oswald, was gunned down while being transferred to a Dallas jail in front of a live national TV audience watching. It’s a moment that shocked a nation and altered the way news is covered around the globe. Since then, live cameras have been a gateway into history-in-the-making, with some of the most shocking events ever taking place right in front of viewers’ eyes.

As we reflect on what Oswald’s death meant to the world, let’s take a look back at The 25 Craziest Things That Have Happened On Live Television.