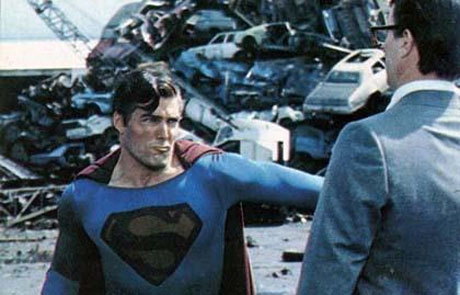 “Slow and uninspired. It’s clear the filmmakers were scrabbling around for new ideas to keep audiences entertained.”
Jamie Woolley, BBC
What we say:

If blockbusters are measured by their set-pieces, then Superman III is a success.

It contains at least three classics: Supermen freezing a lake to put out a disastrous chemical plant fire, Superman using a small glass of acid to destroy a supercomputer which has made its own cyborg lady, and Evil Superman fighting Clark Kent in a scrap yard, which is confusing if you’re five, but also amazing.

And though the humour’s a little broader than in the first two movies, it’s still funny – when Supes rights the Tower Of Pisa, say, or everything Richard Pryor says or does.

Great action, solid laughs, and Clark’s mom from Smallville when she was still hot. Winner.