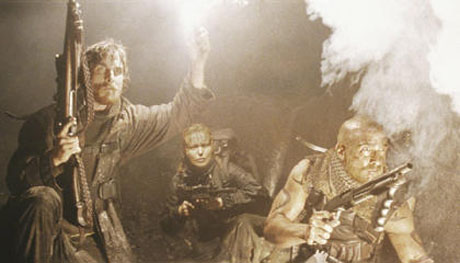 “Waterworld with reptiles.”
Joe Queenan, The Guardian
What we say:

Aside from catching the now world-straddling Christian Bale in a decent pre-Batman, pre-Terminator action flick, the main reason to revisit Reign Of Fire is because it’s not half as bad as everyone seems to remember.

Weird, yes, but not bad. The film’s view of post-apocalypse England is enjoyably grimy (there’s more mud than a medieval Python comedy and everyone wears thick knitted jumpers), Matthew McConaughey is super-intense as a mad, bald American, and the lack of FX budget is craftily dodged by efficient use of the headlining dragons.

That is, not the standard flowery, fantasy nonsense, but something a bit more like Mad Max with massive firey lizards.