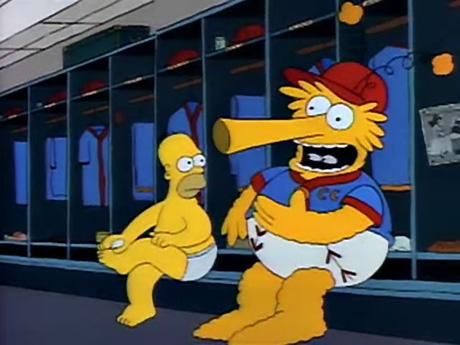 What Happens: In the earliest sports moment on the list, Homer attends ‘Nuclear Plant Employee, Spouses and No More Than Three Children Night’ at a Springfield Isotopes game, gets drunk, does a funny dance in front of everybody to ‘Baby Elephant Walk’ and unexpectedly becomes a star. He adopts the character of Dancin’ Homer and becomes the official team mascot, a role popular enough to earn him a fill-in spot for the Capital City Capitals’ mascot The Capital City Goofball in the Big Leagues. The family says their goodbyes to Springfield and heads to the big city, then immediately make the walk of shame home when little-fish-in-a-big-pond Homer is booed off the field and fired.

Key line: “Oh, my God! I don’t believe it! It’s really you! The Capital City Goofball!” “Hello, Dancin’ Homer. Glad to have you aboard. If there’s anything I can do for you, just squeeze the wheeze.”

I’m still a little sad that the real-life AAA Dodgers affiliate Albuquerque Isotopes took the Isotopes name from ‘The Simpsons’ but didn’t find a way to work the Capital City Goofball (or Dancin’ Homer, for that matter) into their schtick. I would fly from anywhere in the country to meet the for-real Capital City Goofball.

“Dancin’ Homer” works well as a cautionary tale about local success translating into mainstream success, and how you should be thankful for what you have and go for your dreams, but not necessarily put EVERYTHING into them. Sometimes you can make a bunch of people laugh by hip-thrusting to ‘Baby Elephant Walk’. Sometimes people want you to get off the dugout and bring back the thing they’re used to. One of the great successes of the early Simpsons is that they existed not only in a CITY full of familiar, well-defined characters, but in a WORLD of them. Capital City’s a whole new ballgame.