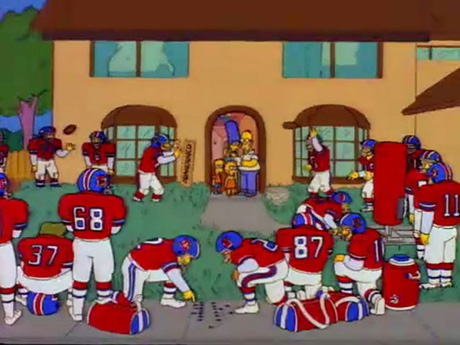 What Happens: Homer lands a dream job with Globex Corporation, which forces our favorite family to relocate from Springfield to Cypress Creek. Homer enjoys working for the charismatic Hank Scorpio (guest voice Albert Brooks), and proves quite adept at his new job. He even confides in his new boss, who turns out to be a supervillain, that his dream is to own the Dallas Cowboys. However, the rest of the Simpsons struggle to adapt to their new surroundings and Homer is forced to resign and return to Springfield in order to keep his family happy. Nevertheless, Scorpio (who has since taken control of the East Coast) rewards Homer for his hard work by giving him ownership of the Denver Broncos. This being the mid-90s Broncos, Homer is non-plussed.

A word on The Simpsons. Each episode really is its own universe, and we grant its writers leeway in creating slightly different versions of this universe as long as they don’t exploit this ability too cynically. That is why the Simpsons’ golden age ended with the Armen Tanzarian episode; that destroyed the trust the viewers had given to the writers. Homer could go into space, work as a blackjack dealer or be best friends with Gerald Ford as long as it was handled well.

So it’s a testament to the writers’ ability that in one of these universes we let them give the Denver Broncos to Homer. It works because it’s a throwaway joke; the Broncos weren’t central to the episode but were the payoff for a running gag. And this being the 1996 version of the Broncos, the writers had no idea that Homer just took ownership of a team that would win two Super Bowls in the next three years. Younger readers of the site (hey Kurp) may forget that the Broncos were a blue and orange joke for most of the ’90s and a couple of decent seasons out of Terrell Davis kept them from being a Browns-esque punchline. Of course, the writers couldn’t have predicted this when they had to come up with a consolation prize for the Cowboys (who have won one playoff game since the Broncos won two Super Bowls). But Season 8 was so good that we’ll let it slide.