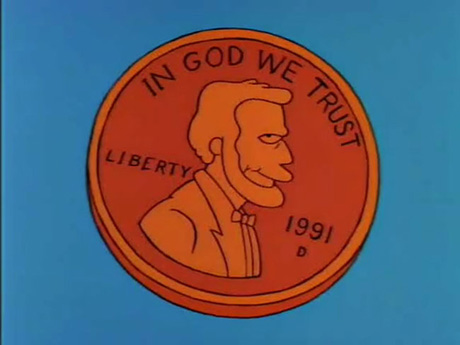 What Happens: Homer refuses to go to church with his family on a frigid Sunday morning. While Marge and the kids freeze through overlong and dull services, Homer gets to sleep in, dance in his underwear, make waffles of dubious nutritional value and watch some fantastic football. To top it all off, he finds a shiny penny on the floor. Homer then renounces Christianity and starts his own religion after meeting God in a vision; he finds out that the Man Upstairs would rather watch football than go to a church on Sundays as well. But ultimately Homer comes around to the benefits of organized religion after a multi-denominational group of neighbors saves him from a burning house.

Key line: “Oh, Doctor! A 98-yard triple-reverse ties the score at 63–63! We have seen nothing but razzle-dazzle here today, three visits from Morganna the Kissing Bandit, and the surprising return of Jim Brown.”

I have my own beefs with organized religion that go beyond inopportune timing for services, but that doesn’t mean my religious parents robbed me of much football growing up. As observant Jews watching TV on Saturdays was discouraged so I missed out on college football until I got out of Dodge. And I had to go to Hebrew School on Sundays through high school, which meant I always missed the start of games. By the time I got home for the 2001 NFC Championship Game the Giants were already up 14-0. So kudos to the Simpsons for pointing out that organized religion will do nothing but make you miss awesome football. Also, you can tell that Springfield is located on the West Coast because Homer gets to see the end of a game by the time the family gets back from church.