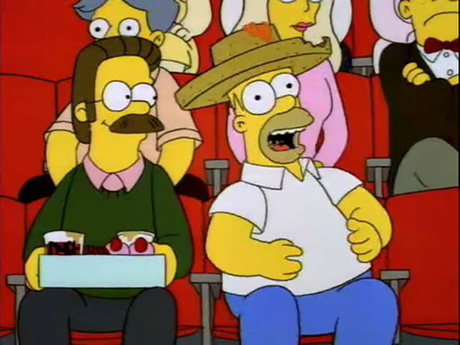 What Happens: After a single man buys all 30,000 tickets to the upcoming Pigskin Classic between the Shelbyville Sharks and Springfield Atoms, Homer resorts to trying to win tickets on the radio. Right before making a call to KBBL, your go-to source for all things Bobby McFerrin, Ned Flanders wins the tickets, because Homer’s a loser, as was Homer’s father, as was Homer’s father’s father, and so on. Homer’s sacrelicious dreams are answered, though, when Ned invites him to the game, where Springfield wins and Homer not only gets to wear a nacho hat, but also meets his hero, Stan “The Boy” Taylor, who knows Ned through his Bible group. Professional athletes, always wanting more.

Key line: “What’s so special about this game anyway? It’s just another chapter in the pointless rivalry between Springfield and Shelbyville. They built a mini-mall, so we built a bigger mini-mall. They made the world’s largest pizza, so we burned down their city hall.”

There’s nothing in life better than reading SNPP reviews of now-old Simpsons episodes from when they were new. For instance, here’s how Frank Gulczinski described “Homer Loves Flanders”:

I think that we can end the debate over the worst episode ever after watching Homer Loves Flanders. This one just stunk. It seemed like they weren’t even trying. The only funny scenes were the T2 parody and the Vertigo/The Deadly Tower sequence. Flame protection on, but I really doubt that there’s anyone who enjoyed this one.